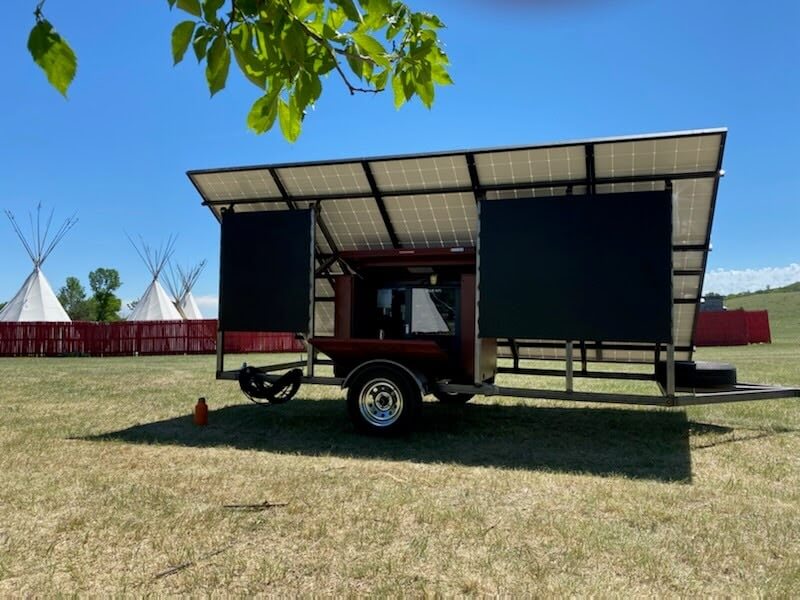 For the indigenous communities of North and South Dakota, coming together for multi-day ceremonies is an honored tradition carried out generation to generation. With a battery storage donation from Blue Planet Energy, these communities were able to swap their reliance on gas-powered generators for a cleaner, more sustainable alternative.

Standing Rock is a popular gathering place for local indigenous communities, where hundreds come together throughout the year to socialize and celebrate their culture. The remote location of Standing Rock – and several other gathering sites across North and South Dakota – however means grid power is not an option. While small generators have been brought in to power essential cooking stations, lighting, and speakers, the constant drone of the generator and harmful emissions are a hindrance to traditional ceremonies and run counter to cultural heritage.

Familiar with the ins and outs of solar and battery storage, Barton Churchill of Energy 1 approached the community with an idea: eliminate generator use altogether and instead draw power from a mobile solar-plus-storage trailer.

“The battery is the single most important component of a solar-plus-storage system of any size. I knew Blue Planet Energy’s Blue Ion donation would not only give these communities energy resilience, it would bring greater awareness to the power of renewables.”

Building Awareness and Appreciation for Renewables

Churchill’s recommendation was greatly welcomed by the region’s indigenous communities, as it aligned with their goal of living sustainably through renewable resources. Managed and constructed by Churchill himself, the project came together through Blue Planet Energy’s battery donation, financial support from NDN Collective, and trailer equipment contribution from Black Dog Fabrication.

Built on a custom 7.5 foot wide and 20 foot long trailer, the mobile solar-plus-storage system operates entirely off-grid and was designed to be easily transported to events throughout North and South Dakota. A sturdy enclosure houses the trailer’s inverter and Blue Ion battery system, providing protection when on the road, with solar panels on top and two large chalkboards on the sides.

“With children always present at these events, education about renewable energy was also a huge motivation for this trailer system,” explained Churchill. “This generation now has up close and personal exposure to the technology and impact of a clean energy system. There’s even chalkboards on both sides of the heart of the power system that the children play on. Having them develop an interest in solar and renewable energy, and making it a part of their lives, is really important.”

Living a future free from fossil fuel dependence is core to Blue Planet Energy’s mission. Donation projects such as this can help spark conversations about renewable energy that ultimately help communities integrate it into their everyday lives.

“Freeing others from fossil fuel dependence through our donation program is core to who we are as a company.”

Blue Ion Reliability is Second to None

Battery reliability was essential for this project, as Churchill needed to be certain the system would not be prone to failure and leave the communities without power. When it came to choosing a battery for this mobile system, Churchill’s first and only choice was what he called “the best battery on the market.”

Remote off-grid systems are often difficult to maintain, especially for an installer with a 10-hour drive between his home and Standing Rock like Churchill or end users with little to no technical knowledge. Troubleshooting or repairs on traditional batteries can also be particularly intimidating. Fortunately, Churchill was reassured knowing that in all his years in the industry he has never seen a Blue Planet Energy battery fail. Blue Planet Energy batteries are also designed to require zero-maintenance, unlike traditional storage solutions, like lead acid batteries.

The safety and durability of Blue Planet Energy's Blue Ion batteries ensure the preservation of meaningful traditions that will be enjoyed for generations to come. So far, the mobile solar-plus-storage trailer has successfully been used for numerous ceremonies, and the communities are grateful to participate in festivities without the disruptive noise and air pollution of a generator.