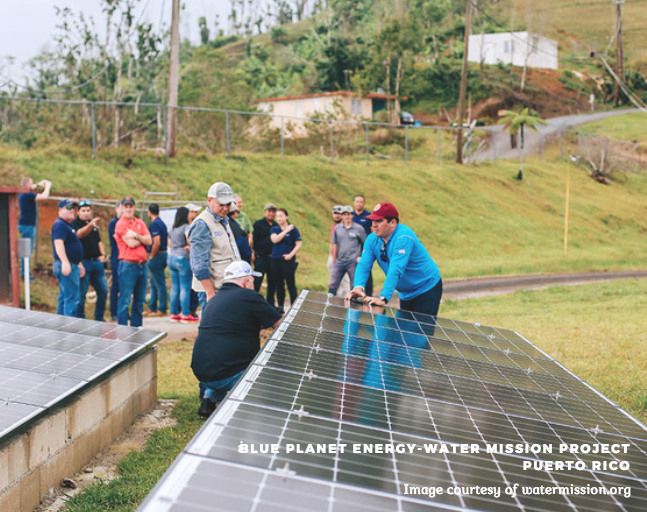 In the Path of Destruction‍

Katrina. Harvey. Sandy. Irma. We may recognize these storms by name, but we cannot conceive the hundred thousands of names of people affected by these tragedies. In September of 2017, Hurricane Maria passed through the Caribbean and wiped out virtually everything in its path. Puerto Rico was unfortunately located in the center of Maria’s route and experienced near-total annihilation of its critical infrastructure. Communities living within the mountainous, rural regions of the island were hit especially hard by the storm. These areas are not typically served by the water utility on the island, the Puerto Rico Aqueducts and Sewers Authority (PRASA), because of their location so the local water systems depend on the surrounding population for operations and maintenance. Additionally, these systems usually rely on diesel generators to pump water to nearby homes and businesses making them vulnerable to interruptions in fuel supply.

The hurricane wiped out the power supply for these independent water systems. Without freshwater, people were forced to use bottled water, boil whatever they could get from their pumps, or travel through treacherous conditions for clean water. As a result, dozens fell ill from contaminated water and quality of life deteriorated quickly. Due to their typically remote locations in the island’s interior and small populations of residents, many non-PRASA communities were the last ones to have power restored after the hurricane. The lack of government funds made it difficult to obtain building materials and skilled workers. Gabi Perez, Regional Sales Manager - Puerto Rico at Blue Planet Energy, said, “People had no water, no power, no communication. They were just trying to figure out how to rebuild their own homes.” Even ten months after the storm, 3% of the remote population not served by PRASA still had consistent water problems, according to an Environmental Protection Agency report.

‍Many non-profits, private companies, and NGOs stepped in to help after Hurricane Maria.

Blue Planet Energy was moved to support a fellow island nation after hearing about the devastation in Puerto Rico.Its experience of developing projects that have the unique framework of being surrounded by water helped the organization conquer the challenges of rebuilding the critical infrastructure on the island. Gregg Murphy, VP of Business Development, states, “We immediately reached out to figure out where we could help and began shipping batteries on FedEx airplanes to the island.”Because of complementary values and missions, one relationship that flourished during the recovery effort was between Blue Planet Energy and Water Mission. Water Mission’s core competencies include deploying or restoring clean water systems as part of disaster relief efforts while Blue Planet Energy has expertise in renewable energy and storage systems Together, the organizations worked to restore power to non-PRASA water systems around the island. The sites that were redeveloped with Water Mission blend power from multiple sources including solar arrays, energy storage, backup engine generators, and the grid. If utility power is present, these systems export excess energy to the utility grid, which lowers monthly operating costs for the communities.

For example, it was reported that in its first month of operation, the solar-plus-storage system deployed in Corozal resulted in a utility power cost reduction of approximately $1,200/month to $300/month, representing a 75% drop in power expenses for community members.

‍At this point, approximately two years after Hurricane Maria, grid power has been restored to each of the independent water sites that have been redeveloped with resilient solar-plus-storage systems. However, the need for resiliency is increasingly crucial as the occurrence of deadly natural disasters increases. Additionally, these systems will provide ongoing benefits even in steady times. The installed solar-plus-storage systems provide operational cost reductions for the communities and decrease their dependence on outside fuel supply. Blue Planet Energy’s projects with Water Mission in Puerto Rico have resulted in sustainable and resilient water supply systems that make communities more prepared for the next emergency. “If it wasn't for the hurricane, we wouldn't be talking. But, from something bad, something good has happened,” Perez expressed.