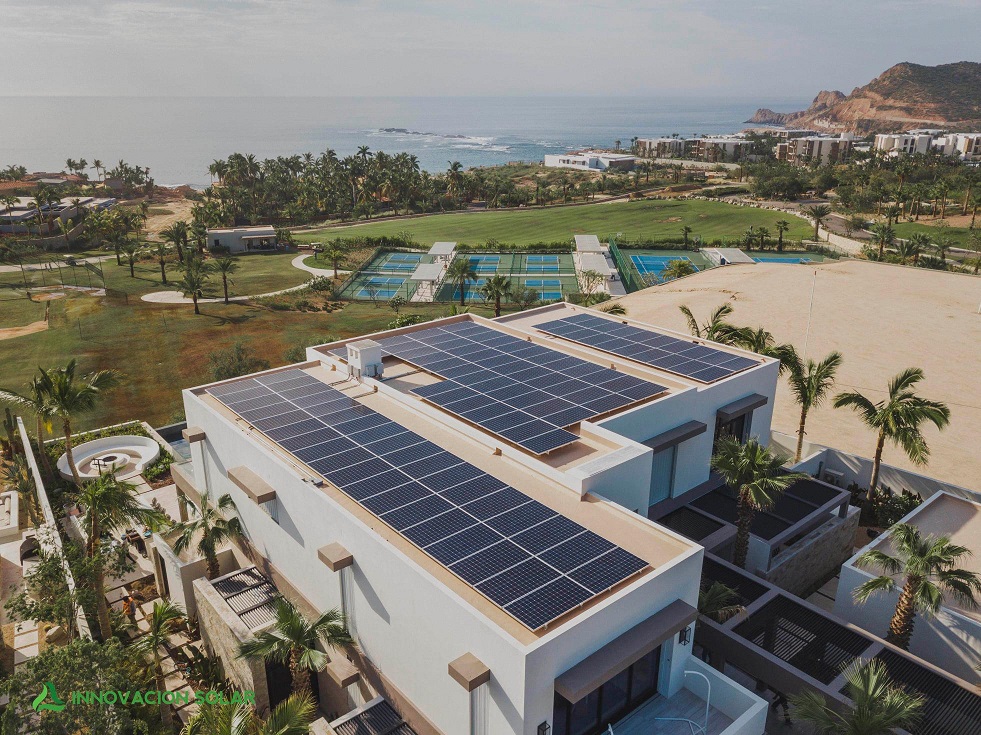 After the last major hurricane struck Baja California Sur, Mexico, many residents lost power for over thirty days. To make matters worse, residents are forced to cope with regular power outages all year long due to the utility’s lack of sufficient electricity reserves coupled with rising electricity demand as a result of an increasing number of new developments.

The majority of homeowners in the luxury community of Chileno Bay Residences in Cabo San Lucas have been relying on propane generators for backup power in the face of ever-increasing grid outages. However, community residents like Douglas did not want a noisy, polluting and difficult to maintain generator, nor to depend on the unreliable national grid as a primary electricity source. Douglas sought a more reliable, fossil fuel-free energy system that could drastically reduce his electricity bill as well as minimize his impact on the environment. Prior to the construction of his new home, Douglas thoroughly researched alternative energy systems and top installation companies in the region.

“We chose the Blue Ion 2.0 system since it is the highest quality energy storage solution on the market, as it provides long-term value for the investment. From extended life expectancy to its exceptional temperature rating, this system cannot be beat. Its high end aesthetic design also matches this community perfectly.”
- Francisco Vargas Garibay, Innovacion Solar

This robust system powers all house lighting, a water supply system, multiple wine cellars, fans, several refrigerators, an ice maker, garage door openers, an air conditioner, an entire IT system with Sonos and a multimedia entertainment system for the whole house. Over 80% of Douglas’s home is powered by solar-plus-storage, as the remaining loads are powered by the national grid.

One of the challenges Innovacion Solar faced with the microgrid was to maximize savings for Douglas as the local utility does not allow homeowners to sell excess energy generated to the grid. Therefore, they designed the microgrid to have optimal load management. Innovacion Solar determined that energy intensive loads, such as laundry machines and the water filtration system, should be operated during peak sun hours. Innovacion Solar then DC coupled the part of the solar-plus-storage system that powered nighttime loads and AC coupled the remaining portion of the microgrid that powered daytime loads as the infrastructure costs of AC coupling to offset daytime consumption was lower than DC coupling. As a result, Douglas could also rest easy knowing he would have sufficient energy storage in the Blue Ion 2.0 system to reliably power all required nighttime loads, backed by their high cycle life and 15-year warranty.

According to Francisco Vargas Garibay of Innovacion Solar, the Blue Ion 2.0 system’s rapid recharge time also directly contributed to Douglas’ savings. “Since the Blue Ion 2.0 can quickly recharge from solar energy during the first hours of the morning, this leaves the peak sun hours exclusively for offsetting Douglas’ largest loads,” Francisco explained. “Any other battery system would take much longer to recharge, in which case some of the peak sun hours would be wasted on recharging the battery rather than being fully dedicated to offsetting daytime loads, which then reduces savings.”

Innovacion Solar also ensured Douglas’ microgrid would have an optimal return on investment by designing it to withstand hurricane conditions, dramatically reducing the possibility of having to replace damaged equipment. Both the SunPower solar panels as well as every component in the custom-designed solar panel racking system are rated to withstand 250 mile per hour winds. Since the roof was made out of concrete with no area to easily anchor the solar panels to, Innovacion Solar designed a robust method of anchoring the system into the concrete while ensuring no rain leaks. All of the conduit was also carefully built into the walls of the house so that they would not be exposed to potential damage.

Another environmental challenge Innovacion Solar had to overcome were the high temperatures in the region, which regularly reach 100°F in the summer. Such high temperatures can often cause some lithium batteries to overheat. Since the Blue Ion 2.0 energy storage system uses the safest lithium chemistry available, lithium iron phosphate, it is not prone to thermal runaway and also does not require a large, expensive cooling unit that adds a new load and results in decreased available energy.

Finally, Douglas’ community mandated that his solar panels be completely flat in order to align with the community’s aesthetics, which reduced additional potential solar generation from the solar array. Given this limitation, and the fact that Douglas’s energy needs might grow over time, Innovacion Solar turned to the Blue Ion 2.0 energy storage system with its easy ability to expand, if needed.

Thanks to Innovacion Solar’s expertise, solar power and reliable, long-lasting Blue Ion 2.0 energy storage, Douglas and his family are now energy independent and do not have to worry about power outages from the utility or a natural disaster. They are also able to benefit from a drastically reduced electricity bill all year long as well as a reduced carbon footprint for their home.